Lismore Cricket Club are proud to present their new logo and emblem.

The new logo introduces the ‘The Lismore Blue’ – a flower with a strong link to the locality and to the Cricket Club. The Lismore Blue (Anemone nemerosa) is a particular type of wood anemone that is flowers in springtime in the glens to the north of the town.

The rare blue colour variant was first coIlected and cultivated by Frances W. Currey (1848-1917), founder of the Water Colour Society of Ireland, and a noted botanist. The plant is still in cultivation today.

The Currey family lived in Lismore and for 3 generations worked as estate agents for the Castle in the 1800’s. In  the 1860’s and 1870’s Frances’ father F.E. Curry helped establish Cricket in the grounds of Castle Farm. Her brother ‘Chet’ Currey is recorded as Hon. Secretary of the Club in 1872. That family link to the town and Club survived through to 2016 with the death of their grand-nephew Dermot Edwards at the age of 86. 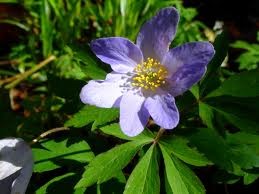 Dermot had a long connection with the Club. He joined the Club in 1978 when he returned to their old family home in Bushfield, Lismore and for the next 30 years dedicated much of his life to the Cricket Club and maintenance and improvement of the grounds. He was elected Club President in the early 1990’s and remained so at the time of his death. He was also a former Vice-President of the MCU for many years. Dermot was a traditionalist. He described artificial wickets as “magic carpets” and insisted that the grass wickets at Lismore were swept with his witches broom before being cut with the old Allet Mower.

Our new emblem pays pays tribute to the memory of Dermot Edwards and the Curry Family. It also links to the Club to the cultural heritage associated with Lismore and the biodiversity of the surrounding area. Finally, it provides a positive emblem which the Club can look to the future with and it is hoped that future generations in West Waterford region will sport ‘The Lismore Blue’ and represent their locality at this wonderful game  for many years to come. Munster Junior Cup Winners of 1978, with Dermot Edwards (3rd from right on back row) One thought on “Lismore Cricket Club unveil our new Logo”