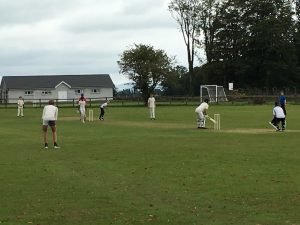 This 30 over match was an initiative from the MCU Youth Working Group, which saw an ‘intercounty blitz’ at the Castle Farm, where Lismore and Waterford District teamed together to host a combined Harlequins / Cork County development team at U-15 level. The purpose was to give both teams some game time on a grass wicket, and help move toward developing Munster underage tournaments next year at U-13 and U-15 level. Both teams fielded a mixture of experienced and newer players aged between 12 and 15 years of age.

A damp start to the morning quickly cleared to give bright sunshine and fine conditions for cricket. The combined Cork team won the toss, and with a bit of moisture still on the outfield correctly put the Waterford team into bat. Waterford, with Caleb Campion and Sam Kingston opening, were kept to only 19 runs off the first 9 overs through the excellent bowling of Kanish and Takir. The two openers were retired after 9 overs and Jamie Bryan proceeded to raise the run rate over the next 9 overs reaching a total of 29, supported by Alex Carr and Callum Corcoran. The change of bowling saw Charlie Gilbert come into the attack, taking the wickets Carr, Malcolm Shute and Jamie Maxwell all in the one over. Waterford showed their inexperience and were inhibited by a defensive attitude in the batting and not taking opportunities to run singles. They reached a total of 74 off their allotted 30 overs, though this would have been greater had their more experienced players not been retired. 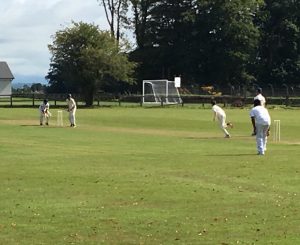 However, the Waterford team focused and raised their intensity from the outset in the field. They had the Cork team 2-2 after the second over, with Bryan bowling Paddy and D’Arcy for ducks. That brought the promising Jack Connelly, who was starting to get established before he was caught for 3 by Thomas Dowling at gully off Bryan in the 6th over. With Shute bowling Anupa in 12th over, Cork were 40-4 and the match looked to swing the way of the Waterford side. However the opener Tamid (26) and Umain (11) wrestled the game back, adding 24 runs to the total, before Bryan removed the both in consecutive deliveries in the 16th over. Alex Carr then bowled Tom to leave Cork for 64-7 and keep the hint of an upset alive, though Kanish and Anukka saw Cork reach the target with 9 overs to spare.

For many of the Waterford players this was their first game this season, and their inexperience showed, particularly in the batting. However, their intensity in the field was encouraging, competitive and certainly made a close game of it. All the team got a bat, and they worked well together in the field. Cork also mixed up the batting order to give their lads some experience on batting on a grass wicket.

Overall this was successful fixture and a good step toward getting the Waterford clubs back involved in the MCU Youth setup again.. No doubt the game will give the coaches a useful indication on the areas to work on over the winter, and hopefully Lismore and WDCC will combine forces again next year to put teams into the U-13 and U-15 MCU competitions.